Are you an entrepreneur or do you have dreams of becoming one? Do you crave mental discipline that will set you apart from others? In this ON Purpose episode, Jay Shetty sits down with Patrick Bet-David to share how you can take your life from the ordinary to extraordinary by practicing mental discipline and big-picture thinking.

Having escaped war–torn Iran at the age of ten, Bet-David recalls the lowest time in his life. He was twenty-three years old without a college degree, $49,000 in debt, and sitting in a parking lot with a friend on New Year’s Eve listening to the countdown on the radio. He faced a choice between rejoining the Army or work at a gym as a salesman.

Bet-David recalls his rags–to–riches story and what it takes to achieve the American dream.

“I went through every single one of my alternatives,” Bet-David explains to Jay Shetty. “I said I'm either going for everything, or I'm going to lose everything I have, and I didn't have anything to lose at the time. I was not willing to settle for a regular life because it didn’t excite me. If these other guys can do it, you know, why not try?”

Bet-David’s drive led him to the field of financial services. By the age of thirty, Bet-David had founded PHP, a financial services company. He also created one of the leading YouTube channels for entrepreneurs, Valuetainment. Bet-David lays out his unorthodox approach to business and life in his new book, Your Next Five Moves: Master the Art of Business Strategy.

Bet-David grew up in a home with a communist mother and an imperialist father. Their differing philosophies on politics were a constant source of debate in the Bet-David home.

This healthy bantering intrigued Bet-David. He became interested in how each party came to hold their viewpoint and learned through the process that there is a lot to learn and that there’s often truth to both sides of a debate.

He believes if more people from opposing sides debated topics today, we could learn so much more than the one-sided messages we hear.

“The point is that for so many of us, we are scared of debate,” Jay Shetty expresses. “We see it as a negative thing. We see debates as challenging conflict. Because we've made debate that way, it's now something that people shy away from and try to avoid.”

“There is mutual respect and understanding,” Shetty explains to Bet-David. “We were trained that you could only debate when you knew both sides fully. So you couldn't debate just understanding your side. You had to understand the opposing sides. If I was debating with you on this movie versus that movie, I should have watched and analyzed both movies. I can't simply argue based on my knowledge.”

Bet-David and Shetty agree that when you can debate in a mutually respectful way, it leads to healthy, meaningful debates, not the low–balling debates that are part of mainstream media.

Bet-David was working at Burger King and going to community college when he woke up one morning and decided that his life was on the fast track to nowhere. He called his dad and asked him to take him to the Army recruitment office. Hoping not to lose the nerve he had built up, he requested to enroll that very day. Two weeks later, he was in South Carolina to begin a career in the Army.

“You have to mentally and emotionally be able to take the words the drill sergeants say to you to see how tough you are,” Bet-David tells Jay Shetty.

Bet-David took the lessons he learned in the Army and applied them to life on the outside. He claims the Army was one of the best decisions of his life.

“In the business world, when somebody is talking trash, or somebody is rejecting you, you're going back and saying they’re not as bad as the drill sergeant games they played,” Bet-David explains to Jay Shetty.

Jay Shetty adds that people often feel scared about their limits but encourages them to keep stretching the boundaries.

“The brain can be rewired and stretched,” Jay Shetty explains to Bet-David. “When you keep stretching it, you expand your abilities, but we're scared of doing that because we feel we might break. Even if you aren’t open to it, you still allow yourself to get stretched. I find the biggest struggle is in convincing yourself that you're not going to break.”

Bet-David agrees with Jay Shetty. He believes that people need to get pushed around a little bit, be challenged, and face resistance. When that happens, you get tested. When you are tested, you learn a lot about yourself. You find out if you have what it takes.

“There is nothing scarier than never experiencing the unknown,” Bet-David explains to Jay Shetty.

When you don’t push yourself and stay in your comfort zone, you will never find your full potential. Bet-David explains that living a life without the unknown is not worth it to him.

“I would much rather get in the ring and fight somebody and have an answer by the end,” Bet-David tells Jay Shetty. “If the answer is he beats me, I'm good. I can live with that instead of not going into the ring and for the rest of my life, thinking I could have beaten that person.”

Don’t be the person who relies on excuses why you can’t do something. Take that leap, go for the gold, and stretch your mind and your thinking to embody the courage it takes to chase the unknown.

Jay Shetty is grateful for the moment he decided to chase the unknown. It led to his fame and success. He tells Bet-David that he was so close to settling for normalcy, security, and stability.

“Every time I look back, I'm just like, ‘Wow, I'm so grateful,’” Jay Shetty explains to Bet-David. “The funny thing is, people think you only make that decision once, but you have to make that decision all the time. There’s a new safety net, there's new stability, new security, and even after five years in, your mind is still trying to get you to settle for that. So it's not that you make the decision once and everything changes. You have to remind yourself that you made that decision.”

Your Next Five Moves

When faced with decisions in life, what is your next move? Better yet, what is the right move?

Bet-David shares a story with Jay Shetty about a day he woke up to a string of bad news. He received a message from his mom that she was disappointed in him and a text from his girlfriend that they needed to rethink their relationship. At the same time, he lost his biggest client he was counting on for his next paycheck, and his number one sales guy left to work for a competitor. All of this happened in the first seven minutes of his day.

“I'm sitting there in bed, and here's what I'm processing,” Bet Davis tells Shetty. “What do I do next? Do I call my mom first to make her feel good? Do I send her roses? Do I call my assistant? Call my girl? Do I call my sales guy? Do I call the client?”

“You can have ten different people experience the same situation,” Bet-David explains.  “You're going to have ten people handle it differently. All I wanted to know was what are the right next five moves in the right sequence to make things right.”

That morning was one reason Bet-David decided to write Your Next Five Moves: Master the Art of Business Strategy.

Most people have a goal. They may be thinking big, but they don’t know their next best step. It is not always about big business or building a company. These five steps are so practical that you can apply them to anything in life.

“Whether you're sitting on your couch or already have a million-dollar business or you just got rejected by a girl who doesn't like you anymore – whatever it is – we all need to know what our next five moves are,” Jay Shetty shares.

Suppose you are a person who is seeking some clarity and insight on how to build your skills for the future. Pick up a copy of Patrick Bet-David’s book, Your Next Five Moves: Master the Art of Business Strategy. Whether you feel as if you have hit a wall or lost motivation or need some new strategy for the business world, Bet-David’s book has it all covered.

Listen to the entire On Purpose with Jay Shetty podcast episode with Patrick Bet  David on “Mental Discipline, Entrepreneurship and Big Picture Thinking,” now in the iTunes store or on Spotify. For more inspirational stories and messages like this, check out Jay’s website at jayshetty.me. 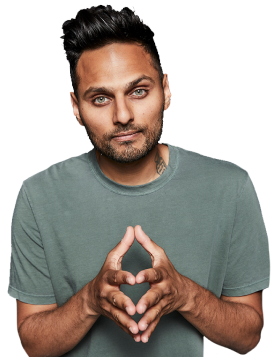 Discover what you need to reach your full potential.

Take our quiz and rediscover the joy of living.